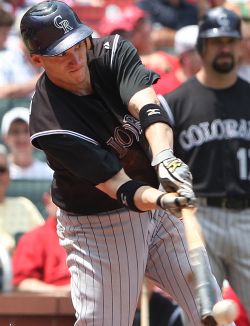 The Cardinals got swept by the Colorado Rockies this afternoon losing their fourth game of the series 5-2.  Brad Thompson took the loss, while former Cardinal pitcher Jason Marquis picked up his 8th win of the year.

Brendan Ryan tripled and scored on a wild pitch in the third to tie the game, then added an RBI single in the 7 th to end Jason Marquis’ day.  That was all the Cardinal offense could muster up again as they were outscored 33-9 in the four game series.

Brad Thompson making the start for injured Kyle Lohse couldn’t finish the 5th inning as he allowed three runs.  Marquis made it 6.2 innings allowing the two runs while only giving up six hits and a walk while striking out four.

Previous Post: « Concerns expressed over funding for health care education program
Next Post: State gets one million to help the head-injured »