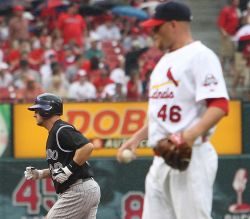 After a sacrifice fly from Albert Pujols in the first inning that scored two runs, the Cardinals bats went silent again and the bullpen had another meltdown leading to the Cardinals’ third straight loss to Colorado, a 7-2 final at Busch Stadium Sunday.  (Kyle McClellan tries to regroup after giving up a HR, Bill Greenblatt, UPI)

Rockies starter Ubaldo Jimenez retired 17 Cardinal hitters at one point who continue to struggle at the plate.  Meanwhile it was another tough outing for the bullpen.  Down 3-2 in the eighth, the game got away again.  Kyle McClellan gave up a solo home run to catcher Paul Phillips.  Then the pitcher Jimenez singled.  Dexter Fowler singled to put runners on first and third and  then Clint Barmes doubled both runs in and scored after Trever Miller gave up  an RBI single to Brad Hawpe.

The Rockies have now scored 28 runs in the first three games of this series.  The Cardinals remain two games behind Milwaukee with both Chicago and Cincinnati a game and a half behind St. Louis for second place.