Governor Jay Nixon has signed the economic development bill that includes an expansion of the Quality Jobs program and brings about some tax credit reform. The bill was signed Thursday morning in Jefferson City before the Governor headed out on a day-long series of ceremonial signings in St. Louis, Kansas City, and Columbia. 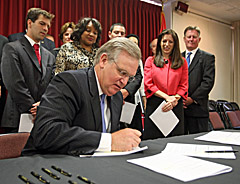 "With this very high unemployment rate it’s important that we all work together to get people back to work This will give us many more additional tools to make sure Missouri is on the cutting endge of coming out of this recession and moving forward."

Despite a lot of support for the legislation it did not pass the General Assembly until the final day of the legislative session.