Tuesday’s win for the Cardinals was all about players knowing their roles and delivering when called upon.  Brad Thompson made his first start of the year after not pitching since May 17 th and outfielder Nick Stavinoha delivered a clutch hit off the bench in the Cardinals 5-2 win over Cincinnati.

It would be hard to imagine manager Tony LaRussa not having a guy like Thompson to rely on after LaRussa called Thompson’s performance "outstanding."  With not a lot of offense behind him and facing Bronson Arroyo, Thompson battled through five innings allowing two runs on five hits with only one walk and kept the Cardinals in the game. 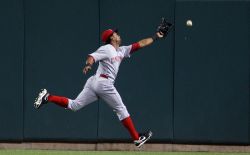 Knotted at 2-2 in the bottom of the sixth, Stavinoha, who entered the game in a double switch broke the 2-2 tie with a double off Arroyo (pictured go over Willy Taveras’ head, Bill Greenblatt, UPI St. Louis)  that scored Yadier Molina who was hit by a pitch and Joe Thurston who singled.  That ended Arroyo’s night, but he would be charged with another run when Stavinoha would later score on a wild pitch off reliever Carlos Fisher.

Stavinoha says it’s tough being a bench player.  He obviously wouldn’t trade his spot on the major league roster for starting everyday in Memphis, but he said it’s tough to stay mentally prepared, and playing off the bench is one of the hardest things to do in baseball.

As far as Thompson, you’ll hear LaRussa praise his effort, but I wonder if this was an audition for major league teams?  GM John Mozeliak needs a bat at third base and it would appear the Cardinals would have to give up some pitching to swing a deal.  This was Thompson’s first game since May 17 th  and while Thompson was filling in the rotation while the Cardinals adjusted around Lohse and Pineiro, I also think the start was a showcase to other teams.

There was a rumor awhile back that the Cleveland Indians were looking for pitching and would be willing to deal Mark DeRosa, a versatile player who can handle three infield spots and the corner outfield positions.  The only issue is would the Cardinals be willing to take on DeRosa’s hefty contract and would LaRussa be in favor of getting rid of his swing man?