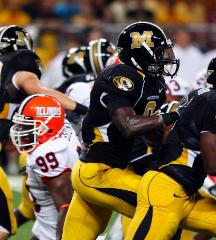 The Missouri Tigers and Illinois Fighting Illini will end their football series after the 2010 season so both schools can get an additional home game.  They’ve left the door open that the series could resume later down the road. (Jeremy Maclin returning a punt in last
year’s Illinois game, Bill Greenblatt, UPI)