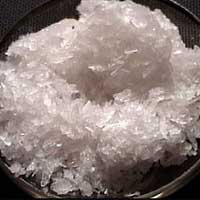 Missouri again gets the infamoustitle of being number one in the nation for methamphetamine busts.

Capt. Tim Hull with the Highway Patrol says there were462 methamphetamine busts and discoveries of meth processing dump sites in Missouri thefirst quarter this year, January through March.

That puts Missouri ahead — way ahead — of our contiguous states.

Hull says there are two ways tolook at those numbers, that it’s possible Missouri has more reported bustsand lab discoveries (or abandoned meth-making supplies) because of our state’s aggressive drug task forces and stringentlaws. And he says, they might get even tougher.

State officials are looking at implementing a system that would electronically track purchases of over-the-counter ephedrine-based drugs and their purchasers. (Ephedrine is one of the main ingredients for cooking meth.)

And, he says, Missouri’s crack-down efforts have become an example for other states in their battle with meth problems.

According to the numbers, the top meth hotspots in the state are Jefferson, Franklin, Jasper and Washington counties, in that order.

All of the counties surrounding St. Louis high numbers of meth busts; Jefferson County had 46 busts.

Tied for second are Franklin and Jasper counties, both with 26. Other counties topping the list: St. Francois, St. Charles and Cape Girardeau counties.