A call goes out for changes to some of the proposals being put forward as Capitol Hill lawmakers in Washington, D.C., discuss a new national energy policy. That call comes from southwest Missouri Congressman and U.S. Senate Candidate Roy Blunt (R-MO). 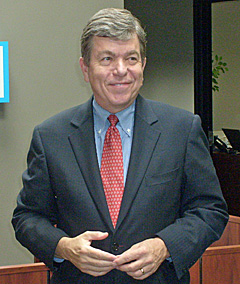 A major focus of the policy ideas being tossed around is something called cap and trade, which aims to cut down on carbon emissions. Blunt sees this as problematic because cap and trade makes coal a major target – and coal is very important to Missouri’s energy needs, with much of our electricity coming from coal – and Missouri is more dependent on coal than are many other states.

"As an example – California, where the principal sponsor of the House energy bill is from, Henry Waxman, four percent of their electricity is coal-generated," said Blunt. "In Missouri, that number is much closer to 84 percent."

Blunt has no doubt that if the amount of coal-generated electricity is scaled back, Missourians would be seeing much higher utility rates.

This, Blunt fears, would not only hurt consumers in the wallet but would have a negative impact on the state’s economy by harming Missouri’s ability to offer attractive utility rates to businesses.

"One of the reasons they’ve located jobs where we live, over the years, is we’ve had competetive, very appealing utiity rates," said Blunt. "And this would take that away."

Blunt made the comments during a visit to the National Biodiesel Board in Jefferson City. The Senate hopeful wants an all-encompassing energy policy which encourages American job growth and promotes alternative fuels and conservation while cutting dependence on foreign energy sources.