State Senator Gary Nodler (R-Joplin) is in the race to succeed Congressman Roy Blunt (R-MO) as the Representative from southwest Missouri. 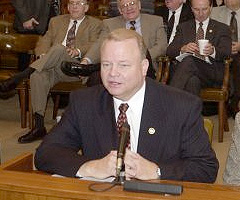 Twin announcements came Thursday as Nodler made public his plans at events in Springfield and Joplin – the two largest cities in the 7th District. Nodler plans to remain in the Senate as he goes after this bid for a seat in the U.S. House.

"Historically, progression from the Missouri State Senate to the Congress in the State of Missouri is fairly common," said Nodler in an interview with the Missourinet. "We have Sam Graves, we have Lacy Clay, we have Ike Skelton – all of whom served in the Missouri State Senate before moving onto the United State House of Representatives. And I don’t think any of those examples are people who left the Senate office to pursue Congress, so I wouldn’t expect to do that, either."

Nodler ran for the seat once before, when he sought to replace Congressman Larry Taylor, for whom Nodler had worked. The Senator says things are different now than when he first ran for the seat in 1998.

"I am a State Senator," said Nodler. "I’ve been an office holder and I have a record as a legislator that people can examine. One thing that’s very different – the first time I ran for Congress I had never held public office, I had never run for public office."

This brings to five the number of announced candidates in the hunt for the Republican nomination. Also in the race are State Senator Jack Goodman (R-Mount Vernon), Greene County Prosecutor Darrell Moore, Springfield auctioneer Billy Long, and Ozarks Technical Community College instructor Jeff Wisdom. While taking nothing for granted, Nodler likes his chances of winning the contest.

"I believe I am in a better position to win it than any of the candidates that have thus far presented themselves."