President Obama’s green jobs adviser,  Van Jones , says Missouri and the Midwest are common-sense locations for green industries to expand. Open spaces, a solid work ethic and experience in working with advanced bio fuels are among those factors, he tells the Missourinet. 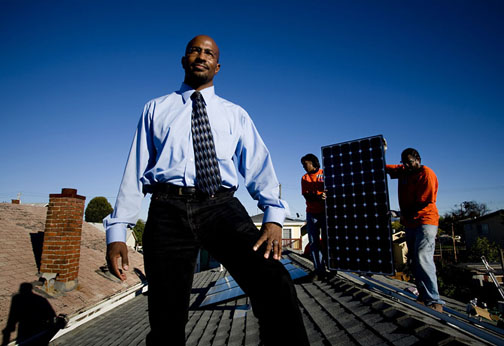 He says the arguments that traditional manufacturing jobs pay more and will better boost the economy here simply aren’t true.

Jones says study after study has shown that green jobs have a wingspan from the GED to the Ph.D. and back again, and that workers that can be “reskilled” will make more money in the end. “A green-collar job is a blue-collar job, upgraded to better respect the environment,” he says. Jones’ Green for All Web site has in-depth information on green jobs, ranging from job descriptions to how to find them and more.

When asked whether Missouri should build a second nuclear power plant to meet energy demands, Jones says Obama’s plan does include nuclear power as long as alternative energy sources — solar, wind and hydro — are part of the whole energy formula. Jones says it’s ironic that many alternative energies were invented in the U.S., but that European countries are the ones who have taken our ideas and run with them. Germany, for instance, has been successful with solar power and has much less natural sunlight than the majority of the United States, Jones says. We have to decide, he says, “if either we want jobs of tomorrow in our country or some other country, and if we want to create the products of tomorrow in the U.S., or have to import them later on.”