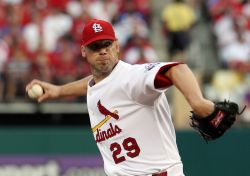 The Cubs offense stayed up on the north side of Chicago on this road trip as the visitors managed just four hits in a 2-0 Cardinals win Wednesday evening at Busch Stadium.  Chris Carpenter returned to pitch five scoreless innings.

Carpenter threw a total of 67 pitches, 41 of those for strikes and after the first inning, when the Cubs had runners and first and third with two outs, they never really threatened Carpenter of the bullpen the rest of the night.  Carpenter started the game with three straight strikes to Alfonso Soriano and then got Ryan Theriot out with one pitch.  Then he walked Kosuke Fukudome and gave up a single to Derrek Lee as the Cubs mounted a rally.  A nice backhanded grab by Albert Pujols at first retired Milton Bradley.

The Cardinal bats couldn’t do much against Ryan Dempster either, but good hustle and small ball led to their two runs.  In the fourth, Pujols hit a hot smash to Theriot at short that was too hard to handle and the ball scooted into left center.  Bradley and Fukudome were slow in getting to the ball and Pujols hustled into second with a double.  He moved to third on a sac bunt by Yadier Molina and scored on a Chris Duncan single past a drawn in, infield to put the Cards up 1-0.

In the seventh, Chris Duncan led off with a double that blooped in over the shortstop and pinch hitter Brian Barden bunt him over to third and Duncan would score on a sac fly from Khalil Greene.

The Cubs made a run in the ninth when they picked up a run off closer Ryan Franklin after Bradley doubled to left with one out and scored on Micah Hoffpauir’s single to right after Geovany Soto walked.  Franklin struck out Reed Johnson to end the game.