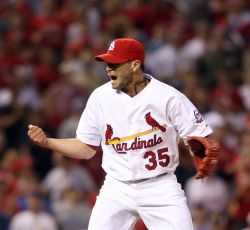 The Cardinals were 0-3 against Cubs’ starter Ted Lilly last year, but Tuesday night was a different story thanks mostly to Cardinals starter Joel Pineiro who tossed a complete game in just 92 pitches for a 3-0 win.

Pineiro credits his nasty sinker for his success.  He forced the Cubs into 17 ground ball outs as Chicago never threatened in this game.   The Cardinals scored a first run inning off Lilly, thanks to a sac bunt from left handed hitter Colby Rasmus who has struggled against lefties this season.  Pineiro got a boost from Yadier Molina after Alfonso Soriano led the game off with a single and was then picked off of first base.

It would be Rasmus again who would help Pineiro’s cause when he hit his 4th homer of the season into right field off of Lilly in the 5th.  Pineiro allowed just the three hits while striking out five including Soriano to end the game.