The clock is ticking toward Wednesday morning’s scheduled execution of condemned inmate Dennis Skillicorn, who is scheduled to die of lethal injection at the Bonne Terre Prison, for his role in the killing of Excelsior Springs businessman Richard Drummond near Higginsville in Lafayette County. And Skillicorn’s attorney continues to pursue all legal avenues to have the execution halted. 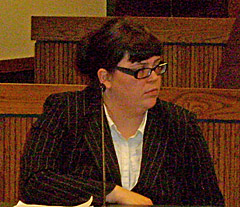 Attorney Jennifer Merrigan, who began representing Skillicorn in 2005, holds onto some optimism. But she realizes saving Skillicorn’s life will not be easy.

“I think that clemency is something that’s granted very rarely,” said Merrigan. “And I think I do maintain some optimism.”

A clemency petition has been submitted to Governor Jay Nixon, with petitioners pointing out Skillicorn has become a changed man who has works well with both inmates and prison officials.

“I think that Dennis could be granted clemency by the Governor,” said Merrigan. “And the Governor can still maintain his commitment to being tough on crime because Dennis actually keeps, you know, the guards and the staff members out at the prison safer.”

Merrigan says Skillicorn is fully aware that he is in a very difficult position, adding he is not thinking of his own fate, at this stage.

“He doesn’t really talk about his punishment in relation to himself,” said Merrigan. “I know that he has asked other people to, you know, kind of look after his wife if it happens, but Dennis mainly talks about other people – the programs in the prisons, the plans he had for them, and who’s going to take them over.”

Skillicorn has been involved in three other murders: A 1979 killing during a home invasion near Lwvasy in Jackson County; and a pair of 1994 shooting deaths at a home in Mojave County, Arizona.