It was considered the top priority of the legislative session and on the last day, with less than two hours left, the House put the final touches on a jobs bill. 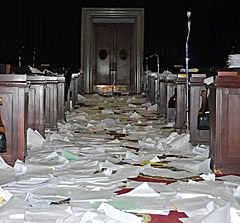 You could hear the relief in House sponsor Tim Flook’s voice as he brought the bill to the floor for debate.

"At long last, I move to adopt SS#2 SCS HCS HB 191 ," Flook, a Republican from Liberty, said as he brought the bill to the House floor for debate just prior to 4pm.

"It’s quite interesting, first bill we passed, now one of the last bills we pass," LeVota remarked to Flook.

It seemed for a while this legislative session, he wouldn’t. Declared the top priority of the session convening as the nation reeled from an economy stumbling into recession, the jobs bill moved quickly through the House. The House gave overwhelming approval to HB 191 February 5th on a 141-19 vote. It stalled in the Senate as senators debated the effectiveness of tax credits. Two other similar measures shared the same fate. Hours upon hours of meetings, a marathon Senate session on Thursday that ended early Friday morning finally pushed the bill through the Senate and back to the House, which accepted the Senate’s slimmed-down version.

After three-and-a-half months, Flook had little left to say in his closing remarks.

The House chamber erupted in applause that refused to die down even as Speaker Pro Tem Bryan Pratt (R-Blue Springs) tried to gavel the chamber back to order. As Pratt scolded the lawmakers, they sprung to the feet and applauded more. The bill won approval 155-2. The bill now goes to Governor Nixon, who had originally challenged the legislature to have it on his desk by spring break.