There is a good deal of agreement among Senate Republicans and Democrats as Senators hold their post session news conference marking the end of the 2009 session of the General Assembly. Both Senate President Pro Tem Charlie Shields (R-St. Joseph) and Senate Minority Leader Victor Callahan (D-Independence) made clear their satisfaction at passage of the economic development bill. 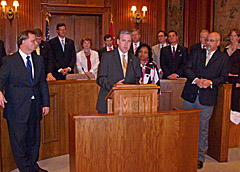 "A challenge to put that together," said Shields. "But we were able to do that – very proud of the work the Missouri Senate did on that."

But Shields is disappointed with the failure of the Legislature to pass the health care legislation that would have provided coverage to tens of thousands of Missourians. His thoughts are echoed by Callahan.

"It is clearly disappointing," said Callahan. "That the 35,000 Missouri citizens who needed the health care and were part of the Governor’s initiative did not make it in the final minutes or hours of this legislative session"

Both Shields and Callahan vow to work together to resolve the health care coverage issue in the future.