Governor Nixon thinks he and the legislature got a lot done in their first session together, with one major disappointment. 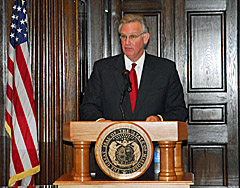 Nixon says his top priority from day one was creating jobs and turning the economy around. He says he and the legislature worked together on a bipartisan basis to get the economic development and quality jobs bill passed and to get targeted tax relief for small businesses.

The governor refused to criticize the few senators that delayed passage of the economic development bill until the last hours. But he was not as charitable in describing his disappointment with the failure of the health care insurance measure, which he blamed on a few House members who refused to compromise. He calls the failure to expand healthcare coverage "shortsighted."

Nixon also has praised the legislature for passage of the Caring for Missourians program which will train 900 health care professionals to work in the state. He also complimented lawmakers for carrying out his promise to higher education to provide a stable source of funding if the public colleges and universities held the line of tuition next year.