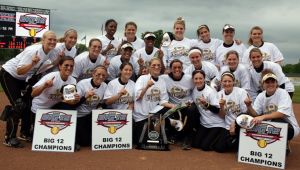 Ehren Earleywine is the head coach of the Missouri Tiger softball team that is coming off a Big 12 championship following a 5-0 win over the Oklahoma Sooners on Sunday.

Now the Tigers will host a regional tournament that begins Friday at 5pm, when the 2 nd seeded Tigers take on Illinois.  Missouri is the only team hosting a regional that is not the number one seed.  That has Earleywine scratching his head.  Click here for ticket information .

We talk about the Tigers run this season and Earleywine talks about a team he feels is built to make a long post-season run.  One of those reasons is the fact he’s got Chelsea Thomas, a freshmen pitcher from a small town in Iowa who throws in the low 70’s.  Her fastball is the equivalent of a baseball pitcher throwing 102 mph!

Earleywine is just the second coach in Mizzou history to win a conference title in his first three seasons as head coach.  The other coach is of course Mike Anderson from the basketball team.  Earleywine says that being a Jefferson City native has given him great perspective on what Mizzou athletics used to be and what it is becoming…and that is a national powerhouse.