Missouri is the cave state, but it might also be the sinkhole state for the same reason. 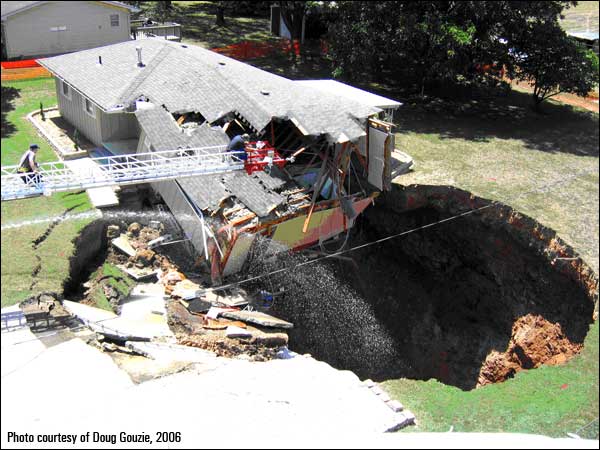 Missouri’s limestone foundation and moist conditions are a perfect recipe for sinkholes, says Doug Gouzie is a geology professor at Missouri State University.

He says there are two kinds of sinkholes, one is a "gradual solution" sinkhole, which is when a flat surface starts to gently sink over a number of years. The other is a collapse sinkhole, which can be pretty dramatic.

Two years ago in Nixa, a sinkhole gave way, swallowing a car and a garage into a 75-foot deep pit. But Gouzie says that’s rare, especially the farther north you are.

Glacial deposits from the last ice age contributed to a more stable foundation north of the Missouri River.

He says rainwater, which gains acidity as it seeps through soil and plant roots, actually dissolves the limestone and absorbs the calcium, causing carbon dioxide gas to bubble into the atmosphere.

Gouzie says over millions of years, that process can remove quite a bit of rock.

Gouzie says it’s sort of like squeezing a pillow — if too much weight is put on top of the rock, the empty spaces will be squeezed out. When this happens, the land surface sinks in.

Missouri is one of many states where sinkholes are common, which can partially be attributed to the limestone foundation, according to Gouzie. Sinkholes form wherever carbonate rocks, such as limestone, are found. About 60 percent of the rock underneath Missouri is carbonate, according to the Missouri Geological Survey, compared to 20 percent worldwide.

After the rock has dissolved, a fracture or cave forms, he noted.

"Sort of like a bean bag chair or a down pillow – if too much weight or pressure is put on top of the rock, the empty spaces will be squeezed out. When this happens, the land surface sinks in and we call it a sinkhole. Sometimes it just makes the ground sag in a gentle low spot that develops over the years, while other times, it collapses in all at once – like the one in Nixa," Gouzie said.

Since the incident in Nixa, sinkholes have gained attention around the area, and Gouzie hopes to help people understand how sinkholes form, how common they are and how uncommon the collapses like the one in Nixa are. His lecture will also include information on warning signs in their own yards that may help them avoid sudden sinkhole collapses or surprise problems.

"There is no particular place I can point to right now and say it is at greater risk than another. I am working on trying to understand what factors might increase the risk – why the limestone dissolves faster in one area rather than wearing away all the rock evenly – and hope to be better able to identify areas at risk."

Visit Missouri Geologic Survey Web site for an explanation of how sinkholes form in Missouri: http://www.dnr.mo.gov/geology/geosrv/geores/sinkhole_formation.htm

Springfield Plateau Grotto Web site with educational information on caves, how they form, and how to manage land with caves and sinkholes:  http://www.spgcavers.org/education.html