A compromise has been reached to move the budget process along and complete the $23 billion state budget by tomorrow evening, but whether it will expand health care remains to be seen. 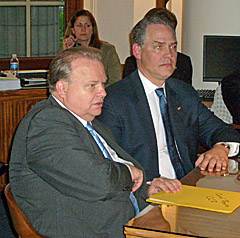 The House rejected on a party-line vote HB 11 , the social services budget that contained a provision to expand Medicaid to cover an additional 35,000 Missourians. The expansion relied on an additional hospital tax; still House Republicans saw it as an unnecessary expansion of Medicaid. After the rejection of HB 11, House Budget Committee Chairman Allen Icet (R-Wildwood) requested the Senate return to the negotiating table.

House Budget Committee Chairman Allen Icet of Wildwood says it’s an effort to resolve a problem that threatened the budget process. He said it was a compromise between doing nothing after the rejection of HB 11 in the House and the Senate position of expanding Medicaid.

"We’re agreeing to try to do something through SB 306, to reach that compromise," Icet told reporters after the conference committee meeting.

Majority House Republicans rejected the proposed Medicaid expansion, but Democrat Chris Kelly of Columbia, a House budget negotiator, agreed to the deal even though it’s unsure what the results might be.

"I think there are people of good faith on the other side; Republicans of good faith," said Kelly. "They have to move a difficult caucus on this. And so, we can’t drop the ball this early."

The question remains: can Icet deliver Republican votes for the Senate bill to expand health care?

"I will certainly try, because I’ve agreed to this," said Icet.

House Majority Floor Leader Steve Tilley (R-Perryville) told reporters he plans to bring SB 306 before the House Monday and send it to conference to see if an agreement can be reached that is acceptable to the House, the Senate and the governor’s office.

Previous Post: « Harsh debate on House floor prior to rejection of Medicaid expansion
Next Post: Park Univ. comes up short in conference final »