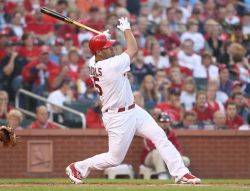 Albert Pujols continued to beat up on Pirates’ starting pitcher Zach Duke.  Pujols is now 14 for 28 with two homers in his career against Duke after going 4 for 4 with a solo home run in the first inning as the Cardinals snapped a three game losing streak with a 4-2 win. (photo by Bill Greenblatt, UPI)

Chris Duncan hit a two run triple in the fourth inning and Tony LaRussa had to depend on his bullpen for the final five innings after starter Mitchell Boggs was pulled after just 4.1 innings.

Boggs was charged with the two runs as Kyle McClellan picked up the win.  He along with Dennys Reyes, Jason Motte and Ryan Franklin held the Pirates to just one hit over the final five innings.  It was great to see the bullpen come up big, because after Duke was pulled after just 77 pitches, the Pittsburgh bullpen came up big as well.

Pujols is now hitting .364 and has 11 home runs in his first 27 games.  Last year, he didn’t hit his 11 th homer until the 44 th game of the year.  Tony LaRussa talks about Duncan’s big night and Mitchell Boggs’ experience.  You can also listen to Duncan, Boggs, and Pujols by clicking below.

Previous Post: « Mizzou wins on the field and classroom
Next Post: Ponson gets first win with plenty of support »