The budget for the 2010 fiscal year that begins July 1st must be through the General Assembly by Friday. And House and Senate conference committees have completed work iron out the differences in the two chambers’ versions of the various bills. But there could be a hang up over one of the bills that has been moved out of conference – HB 11 , which appropriates funding for the Department of Social Services. 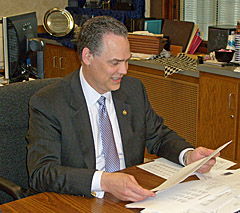 Although he signed off on the conference committee report to send the bill back to the House, House Budget Chairman Allen Icet (R-Wildwood) says the future of the version agreed to might or might not clear the General Assembly.

“Anything is possible,” says Icet. “I honestly have no idea what is going to happen.”

That means the conference committee version might be brought before the House for a vote, or it might return to conference, but there are not a lot of options.

“I would say those are two of the most likely,” said Icet. “Either motion to go back to conference or you vote on the bill – it passes or fails. I guess another option is simply not make the motion, whatsoever, or do other things with the bill, simply withdraw the bill.”

And, if House Bill 11 is not passed by the General Assembly by Friday at 6 pm?

“The Governor would need to call the General Assembly into special session to deal specifically with House Bill 11.”

A major point of contention is the Senate’s desire to expand health coverage to the so-called working poor, while the House prefers to focus on covering those with pre-existing conditions and others who are unable to purchase insurance.