The best and brightest in American chess head to St. Louis this week for the 2009 U.S. Chess Championship. 24 players will take part in the event, which is being held at the Chess Club and Scholastic Center of Saint Louis . 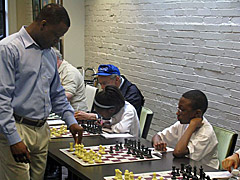 The club’s Executive Director Tony Rich says a bid was put forward and the U.S. Chess Federation chose the Chess Club as the host.

"The U.S. Chess Federation awards the U.S. championship to an organization, based upon a bidding process," said Rich. "And the Chess Club was lucky enough to be awarded this within our first year of operation, actually."

The event will be held over nine days, from Thursday, May 7th through Sunday, May 17th. There are 24 players competing, with the winner chosen on a total points basis as it is not a single-elimination tournament.

"All 24 competitors will play every day of the tournament," said Rich. "And at the end the person with the best score is declared to be the U.S. champion."

Quite a bit of prize money is up for grabs with a purse of more than $130,000 in prize money. In addition, there is the Fischer Memorial Prize of $64,000 to be awarded to a player who wins all nine rounds of the Championship without tasting defeat. The Memorial Prize honors chess legend Bobby Fischer, who gained worldwide attention when he defeated Soviet grandmaster Boris Spassky for the World Championship in 1972. Fischer was the winner of the U.S. Championship in 1964, going undefeated.

Tickets are free to members, with monthly membership available for $12 for adults and $5 for full-time students. Information is available through the Chess Club and Scholastic Center of Saint Louis or by calling 314-361-CHESS.