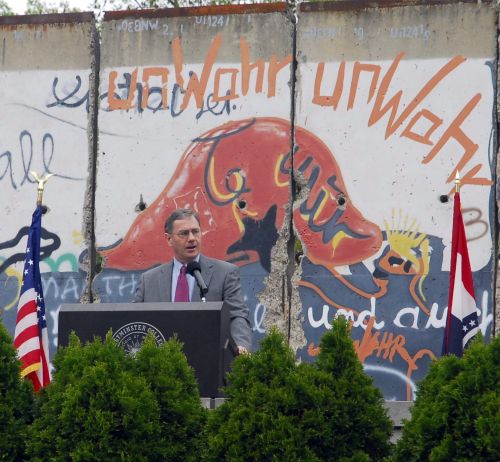 Westminster President Barney Forsythe says the college still embodies the ideals of Churchill so many years ago.

“Our mission is to educate and inspire students to become leaders in a global community,” Forsythe says, “and lead lives of success, significance and service, just as Churchill did.

“The Winston Churchill Memorial and Library is a Missouri treasure marking a significant event in world history and embodying the bravery, statesmanship and character of Sir Winston Churchill and his commitment to justice and democracy,” Luetkemeyer says. “I appreciate the bi-partisan support for this important measure from my Missouri colleagues and I am hopeful that our other House colleagues will join us in recognizing this historic site as America’s National Churchill Museum.”

Every member of Missouri’s House delegation has signed on as original co-sponsors of the resolution.

The state-of-the-art interactive museum showcases new interactive exhibits that bring Churchill to life and includes an expanded research library and archives. Visitors to the museum walk away with a greater appreciation of the historical and political analysis of the life and legacy of Churchill and a sense of Westminster’s educational mission to graduate the world’s future “leaders of character.” The Winston Churchill Memorial and Library is the only museum in North America totally devoted to Churchill’s life and work.

The Museum is located in the Undercroft of a 17th Century Christopher Wren church, which was brought stone by stone from London and reconstructed on the Westminster campus to commemorate Churchill’s historic visit in 1969. The Churchill Memorial and Library in Fulton underwent major renovations in 2005 and reopened to the public in 2006 in celebration of the 60th anniversary of Churchill’s famous 1946 speech.

“The Churchill Memorial embodies the College’s mission by telling the story of the life and legacy of one of the 20th Century’s greatest leaders—Sir Winston Churchill. Designation as the National Churchill Museum will raise the profile of this wonderful new museum, drawing visitors from all over the world to America’s heartland where they will learn and be inspired by Churchill’s example,” Forsythe says.

“Since 1969, the Churchill Memorial has served as a centerpiece of national commemoration to Winston Churchill,” says Rob Havers, executive director of the Memorial. “In light of the creation of the new museum and its world class state-of-the-art exhibits, having the museum designated as the National Churchill Museum is highly appropriate and we look forward to raising the national prominence of this truly amazing tribute to one of modern history’s greatest historical figures.”