This is National Crime Victims’ Rights Week and Governor Jay Nixon took advantage of the opportunity to say he looks forward to signing a bill that would extend the rights of Missouri’s crime victims. The comments were made in the Capitol Rotunda, where the Governor said he wants the Legislature to complete work on Senate Bill 338 , which allow victims of some crimes to have surrogates appearing on their behalf at parole and probation revocation hearings. 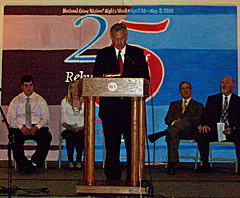 "Among its provisions," said Nixon. "This bill will allow victims of certain crimes by violence to be represented by legal counsel or by representative they designate at parole and probation revocation hearings rather than having to appear each time, themselves, in person."

The legislation would also permit crime victims to receive a current photograph of the person behind bars prior to his or her release as part of the effort to aid the victim.

This year marks the 25th anniversary of the Victims of Crime Act, passed by Congress in 1984, creating the Crime Victims Fund.