President Barack Obama’s town hall forum at Fox Senior High School in Arnold gave six people, chosen at random, the opportunity to ask questions of the President. Questions asked dealt with such issues as the future of the American auto industry, education, and concerns about the environment. 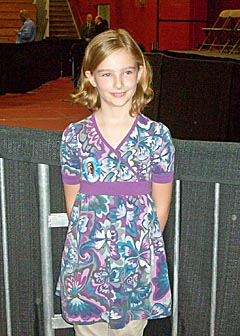 The environmental concerns were raised by nine-year-old Laurel Bonebrake of Arnold, who attended the event with her mother.

“It’s an honor to meet you, President Obama,” said the nine-year-old fourth grader. “How is your administration planning to be more environmentally friendly?”

The President told her it was a great question, then talked about efforts to need to find a balance between environmental and economic needs.Later, meeting with reporters, the youngster said she was really kind of nervous asking the question, then added, “I thought that was really something. It was probably one of the biggest moments of my life, so far.”

Laurel had no idea she would have an opportunity to ask a question, let alone be interviewed by a gaggle of reporters later on.

“I had no idea I would be interviewed,” said Laurel. “If you told me before I came here that I was going to be interviewed by a ton of people I would have said you were wacky.”