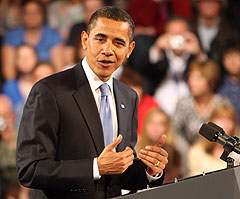 President Barack Obama spends part of his 100th day in office with a visit to Fox Senior High School in Arnold.

The President took part in a town hall meeting in front of about a thousand people jammed into the high school gymnasium. Some of the attendees were invited guests while others took part in a lottery for the few tickets available to the public for this event. The town hall got underway at 10:20 am, but a long line of people began snaking around the outside of the school hours earlier.

The President spoke for about 20 minutes before going to the town hall question and answer format. He stressed that while he’s pleased with progress made during his first 100 days in the Oval Office, he is not satisfied.

Heading to the Q&A portion of the event, Obama took six questions from the audience. Issues covered included concerns about the United States auto industry, improving our educational system in the country, the future of Social Security, alternative medical care, relations with other countries, and the environment.

The President left the stage around 11:35 to hop on a chopper to Air Force One and the flight back to Washington for Wednesday night’s address to the nation. [Photo by Bill Greenblatt/UPI]