As the chairman of the Missouri Highways and TransportationCommission completes his second month on the job, he reflects on thedepartments successes and challenges. 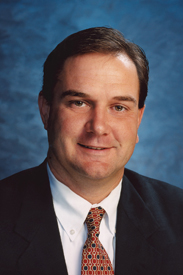 Mike Kehoe, after serving four years on the commission, took the lead as chairman at the beginning of March. (He was appointed to the commission in 2004 by then Gov. Matt Blunt.)

He says the department’s been working to strengthen its relationshipwith other entities, a part of working with MoDOT he really enjoys. Those partnerships were made evident Monday as MoDOT, key transportation legislators and officials from Union Pacific and Amtrak came together to break ground on a rail expansion project in California, Mo.

A study by the University of Missouri Engineering Department identified a 25-mile stretch in California as a major bottleneck along the St. Louis to Kansas City corridor, putting Amtrak passenger trains behind schedule.

There are no sidings long enough for Union Pacific cargo trains to pull off the main track, allowing Amtrak to speed through. Therefore, Amtrak has to pull off instead, resulting in late arrivals.

Kehoe says this is one of many projects where MoDOT and other agencies are working together to solve problems and improve Missouri transportation.

Kehoe says the department’s learned valuable lessons when looking atrough patches its encountered in the past, like the failed 15-yearhighway plan of the 90s. The five-year rolling plan now used means heightened accountability for MoDOT, which reviews and updates the plan annually to better track projects and spending.

He says MoDOT projects are always going to be controversial becausethere’s never enough funding to complete all of the projects peoplewant finished, but with everyone thinking outside the box and aiming at a common goal, more gets accomplished with each passing year.

In 1998, accountability legislation passed, requiring MoDOT to submit anannual report to the legislature by Nov. 10 each year. The same legislation created theposition of MoDOT director.

MoDOT adopted its rolling five-year plan for highway and bridgeimprovements in the state in 1999. That’s when the 15-Year Plan was scrapped as the financial blueprint for construction projects.

Serving with Kehoe, who lives in Jefferson City, on the commission is David Gach, St. Joseph, vice-chairman. Kehoe andGach have both served since 2005, with terms endingin 2011.