Cubs outfielder Kosuke Fukudome celebrated his 32nd birthday with a home run and five RBI as the Cubs snapped the Cardinals nine game home winning streak with a 10-3 win on Sunday.

Todd Wellemeyer, starting against his former team admitted he may have been a bit too jacked up for the start of the game, as he gave up three runs in the first inning.  Wellemeyer gave up three straight singles and a double to Derrek Lee before retiring an out.  He also gave up a run in the second when he walked in 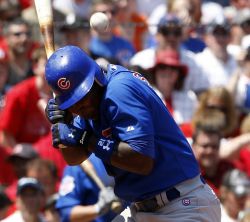 Micah Hoffpauir.  That inning included Wellemeyer plunking Alfonso Soriano in the head who would stay in the game. (photo courtesy of Bill Greenblatt, UPI)

Yadier Molina would hit a solo home run in the bottom of the second, but the Cubs added two more in the fourth.  Wellemeyer finished up five innings giving up six runs, five earned.  Rick Ankiel also homered off Cubs starter Rich Harden who gave up two runs in six innings, but struck out nine.

The Cardinals remain a game and a half ahead of Pittsburgh as the Cardinals head to Atlanta for a series starting on Monday night.