The president of the Lincoln University Foundation is biking more than 1,400 miles to raise money for scholarships. 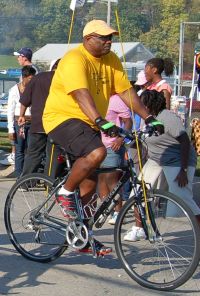 Victor Pasley is 62 years old and on the verge of retirement. He lives in Fulton, but works in Rochester, New York. An avid bicyclist, he thought of a better journey home than just hopping on a plane.

He rides with a club in New York that will begin the journey with him Saturday, April 25. His kids will meet up with him and ride alongside once he gets to Chicago. He’s taking pledges for each mile he rides. That money will go to scholarships to students going to Lincoln.

He invites everyone to join him for the final leg of the trip from the Missouri River Bridge to the university.

"Join us at the bridge and ride to the campus. It’s two and a half miles; you could ride it on your tricycle," he laughed.

In addition to raising scholarship money, he also hopes his journey will inspire others, no matter what age, to get pedaling for better health.