House leaders propose the state use federal economic stimulus money to give Missourians a one billion dollar tax break. 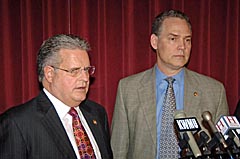 House Speaker Ron Richard (R-Joplin) says the idea of providing the biggest tax cut in state history grew out of frustration during budget hearings on how to spend federal stimulus money.

"In the end, when it was a spending frenzy by both sides, we thought it was probably a time to not act like Washington, D. C. and we made adjustments," Richard says.

The House Budget Committee has been working on a spending blueprint for the two billion federal dollars the state has the most discretion over. Requests have been pouring in from all over Missouri to use federal stimulus money to fund various projects. The committee had been going through the painstaking task of narrowing the list of projects.

Under the new plan, federal money still would be used for certain capital improvement projects, such as the expansion of the Ellis Fischel Cancer Center in Columbia, and one-time expenditures such as the statewide interoperability emergency communications system. About one billion dollars would be set aside to pay for lowering the state personal income tax rate from 6% to 5.5%. The half a percent cut would be effective for only two years.

The proposal calls for the income tax cut to take place immediately. Missourians would benefit either from less state tax being withheld from their paychecks or next year with a larger state income tax refund.

"Has this turned into more of a Washington, D. C. environment which no one in this chamber wants to look like? " Icet says they asked. "We want to do what we think is the best for the public’s dollar. Again, these are taxpayer’s dollars and we are very, very sensitive to that. The last thing we want have is a misperception of what we’re trying to do."

How much did those requests total?

"Once the requests got past two billion, I stopped counting," Icet says.

Icet says Republicans had considered sending out rebate checks, similar to the method the state used in the late 90s when, flush with cash, state revenues triggered Hancock Amendment refunds. He notes that some complained then about the expense the state incurred in processing sometimes very small checks. It also would be difficult to determine who would get what size rebate.

There is only two weeks to sell this change in direction. Icet plans to by-pass the normal budget process to move the plan forward. He says he doesn’t plan to take the proposal before the entire Budget Committee, but instead to appear before the House Rules Committee so the bills can be rushed to the floor for debate and approval. Then, there is the Senate, which seems lukewarm to the idea, at best.