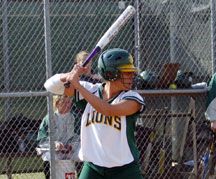 Missouri Southern junior Whitney Clute hit her ninth home run of the season, tying an MSSU single-season record, as the Lions swept a double-header from Northeastern State winning game one 6-4 and game two, 4-1.

The Lions scored two in the first and one each in the fourth and the fifth of game two. Clute picked up home run number nine on the season in the first driving in two runs with a drive to right field. The bomb ties her with current assistant coach Alese Woolard for most home runs in a single-season at Southern.

Clute started the game, and went four innings before giving way to Vanessa Elmore. Clute came in to pitch the sixth and the seventh to close out the game. Clute threw a total of six shutout innings, scattering four hits and striking out three.

Clute went 2-3 with a pair of runs and RBIs. The Lions will jump back into MIAA play this Saturday when they travel to Fort Hays State for a double-header beginning at 1 pm.