Vice President Joe Biden has visited a company in Jefferson City to detail Department of Energy plans to develop a strong electrical grid which will create new jobs and help deliver environmentally cleaner power to Americans throughout the country. 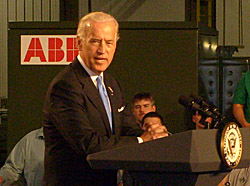 During the visit to ABB – a company that manufactures transformers – the Vice President was joined by Commerce Secretary Gary Locke as they spoke of how the Recovery and Reinvestment Act will contribute to major projects that include a $300-million wind energy project in DeKalb County in northwest Missouri.

That project known as the Wind Capital Group’s Lost Creek Wind Farm will be the state’s largest wind energy development which will, according to the U.S. Department of Energy, create more than 2,500 jobs. GE Energy will supply 100 of its wind turbines and ABB will provide 100 electric transformers, which will be made at ABB’s Jefferson City plant.

In a speech to about 400 company employees, Biden spoke of the need to incorporate the technology of ABB and other American companies with the greening of America as it deals with expanding energy needs.

"These necessary upgrades are going to allow us to modernize our electrical grid, improve its efficiency and reliability, while stimulating local economies while saving consumers money," said Biden. "And right here in Missouri the Lost Creek Wind project will be designed with smart grid components in mind."

ABB employs about 120,000 people in approximately 100 countries, including 9,000 in facilities throughout the United States, and 650 at the Jefferson City plant.