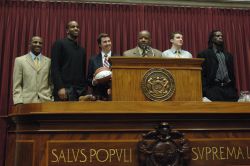 The Mizzou basketball team was honored by the State House of Representatives and Senate on Tuesday.  Coach Mike Anderson took the podium to address both houses and those in the gallery.

For the past two seasons, the Missouri football team has made the trip from Columbia to Jefferson City to show off Cotton Bowl and Alamo Bowl trophies, but not many would have expected the basketball team to make that trip for awhile.

It was just over 14 months ago when the program appeared to be in no better shape than the way Quinn Snyder left the program after several players brawled outside a downtown Columbia night club.  Yet, head coach Mike Anderson cleaned house, brought in five freshmen and two transfer student athletes in Zaire Taylor and Keith Ramsey and with the leadership of DeMarre Carroll, J.T. Tiller, and a mature Leo Lyons, the Tigers bounced back from a 16-16 record to 31 wins and a trip to the Elite Eight.

That prompted national attention for head coach Mike Anderson, but as reported over a week ago, the University came back with a contract extension to Anderson’s liking and yesterday the details of those terms were made official.

Listen to Anderson as he addresses the Missouri Senate.

Listen to Mike Anderson in the Missouri Senate