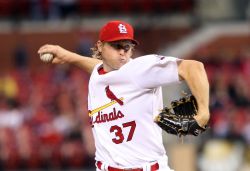 Todd Wellemeyer called his control "iffy" and the Pirates found every hole with a lot of soft hits as the Pirates jumped out to a big lead and held on for a 7-4 win Wednesday night at Busch Stadium.

The Pirates came out in the second inning and scored four runs thanks to two singles that found their way through the infield and one that blooped into the outfield.  It could have been worse, but Ryan Doumit got caught off first base after singling with the bases loaded to give the Pirates their second out of the inning.  Wellemeyer then got Adam LaRoche to pop up to end the rally at four runs.

The Cards added a run in the bottom of the inning, but a double and single in the top of the third put the Pirates back up 5-1.

Wellemeyer settled down to hold the Pirates scoreless in his final two innings of work and the Cardinals kept scrapping, but a two run homer by Nate McLouth in the sixth off reliever Brad Thompson made the score 7-2 at that point and it was just too much for the Cardinals to come back from.

David Freese made his first start at third base and picked up his first two hits of his major league career.  Tony LaRussa using his third different lineup in three games had Colby Rasmus leading off who went 0 for 3, but had two walks.

Listen to LaRussa and Wellemeyer comment on his outing.  12:40 start time Thursday afternoon with Chris Carpenter making his first start of the year.