Former U.S. Speaker Newt Gingrich spends a good part Wednesday in Jefferson City, taking part in a healthcare symposium sponsored by the Center for Health Transformation – the organized he founded to find solutions to the nation’s health care problems. 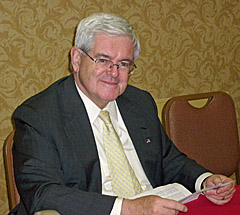 Topics covered included Solutions for a 21st Century Health System in Missouri and Fighting Medicaid Fraud. On the latter, Gingrich spoke of the need to go after providers who are stealing from the Medicaid and Medicare system, calling these individuals "crooks." Gingrich also addressed the matter of patients who take advantage of problems with the system.

"People are not only irresponsible," said Gingrich. "People think theft is reasonable."

On finding solutions to our problems, Gingrich made it clear there is a need for Americans to be responsible.

In an interview with the Missourinet, Gingrich talked about individuals changing attitudes about their own health and well being.

"I think it’s important to recognize that in the long run your health is about you," said Gingrich. "It’s about what you eat. It’s about your attitude. It’s about your exercise pattern and it can be as simple as getting off the couch and walking."

His bottom line: "In the long run you’re either going to take care of yourself or you’re going to have a shorter and more painful and less pleasant life."

Moving to politics, Gingrich told the Missourinet he rejects suggestions the Republican Party is lost in the political wilderness.

"I think the Republican Party going to offer a series of solutions that are going to very powerful," said Gingrich. "With Congressman (John) Boehner’s leadership the House Republicans, last week, offered a budget that was half as expensive as the Democratic budget and created twice as many new jobs."

As for his recent suggestion that some Republicans might search for a third party option if the GOP doesn’t get its act together, Gingrich

"There are a lot of Republicans who are fed up with business as usual," said the former Speaker. "But I see what John Boehner’s doing in the House and what Mitch McConnell’s doing in the Senate as very encouraging and I think you’re seeing the emergence of a much more idea-oriented and solutions-oriented party."

Gingrich views new Republican National Committee Chairman Michael Steele as someone who is smart and aggressive with the goal of creating a broad-based majority party. Gingrich sees that as a good thing.