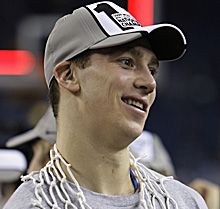 After the North Carolina Tar Heels were beaten by Kansas last year in the Final Four, many thought Poplar Bluff native Tyler Hansbrough would leave UNC to try his hand in the NBA.  Instead, he elected to return for his senior season to do one things.  Win a championship.

The goal was reached Monday night at Ford Field in Detroit, as Hansbrough scored 18 points and grabbed seven rebounds as the most decorated Tar Heel in their rich history of basketball can now lay claim to a national title following UNC’s 89-72 win over Michigan State.

I was amazed over the last year or so, how people were quick to criticize Hansbrough for not going pro or saying he won’t be good enough for the NBA.  Who cares?  Here’s a kid who accomplished more individually than any other Tar Heel, including Michael Jordan who was selected for basketball’s hall of fame, but he was missing a national title and wanted to come back for his senior season for one more shot.

I say congratulations to Hansbrough.  Not just for winning the NCAA championship, but for setting a goal and realizing a dream.  Proving that if you put time and effort into something you love, you can achieve anything.  That’s a great story and one that should be passed on to young kids.  There is more to life and happiness and having a sense of worth, than just going after the quick almighty dollar.