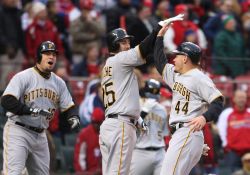 Ryan Ludwick broke a 2-2 in the 8 th inning with a home run to straight away center field, but closer Jason Motte could not save the game giving up four runs in the 9 th with two outs as the Cards lose 6-4 to Pittsburgh on a chilly, windy afternoon at Busch Stadium.

The Pirates threatened in the first inning loading the bases on two hits and a walk given up by Adam Wainwright, but he worked out of the jam striking out Andy LaRoche on a pitch in the dirt.

The Cardinals were quiet the first two innings with the bat, but Wainwright helped his own cause leading off the third when he reached on an error by third basemen Andy LaRoche who couldn’t handle a hopper.  The Cards followed with a single by Brendan Ryan, a hard line out to the second basemen off the bat of Rick Ankiel, then three straight hits up the middle to give the Cards a 2-0 lead.  Maholm got out of the jam when he got Yadier Molina to ground into a 5-3 double play.

It appeared Wainwright may run into trouble in the 5 th .  He walked the pitcher Maholm on four pitches, but he got leadoff hitter Nyjer Morgan who singled twice to strike out.  Then he got Freddy Sanchez to fly to right and after a two out walk to Nate McLouth, he got Ryan Doumit swinging on a pitch in the dirt to end the inning.  Wainwright wiggled out of another jam.

The sixth inning finally did in Wainwright.  Andy LaRoche and Brandon Moss walked after Wainwright got Adam LaRoche to strike out.   Tony LaRussa went to Josh Kinney who got Jack Wilson to pop up, but then walked Maholm after falling behind 3-0.  I was surprised Pittsburgh manager John Russell didn’t pull Maholm for a pinch hitter, but the move paid off.  LaRussa called on Trever Miller his lefty specialist to face Morgan who singled a 1-2 pitch into left which tied the score at two chargingboth runs to Wainwright.  Miller then got off the hook when Sanchez singled to right.  Maholm held at third, but got caught in a rundown when the ball got away from Molina…Miller backed up the throw and got Maholm out at the plate easily..

The score remained tied at 2-2 until Ryan Ludwick launched the first pitch he saw from relief pitcher Tyler Yates, 407 feet to straight away center giving the Cardinals a 3-2 lead.  After a walk to Duncan, John Grabow came on in relief and gave up a single to Skip Schumaker which brought up Freese with runners on first and third who hit a sac fly to right scoring pinch runner Joe Thurston to put the Cards up 4-2.  Then Grabow had Schumaker picked off first but threw the ball away and Skip made it down to third.  Ryan flew deep to left to end the inning.

Jason Motte, who won the closer’s job this spring, came on for the first save opportunity.  The crowd got antsy right away from Sanchez greeted Motte with a double to deep left field.  Motte came back to get McLouth swinging on a high heater and then got Doumit to ground to second.  All the damage would come with two outs.  Adam LaRoche singled in Sanchez.  Pinch hitter Eric Hinske doubled down the left field line and then Motte hit Brandon Moss on a 2-1 pitch to load the bases for Jack Wilson who cleared the bases on a drive to left center on an 0-2 pitch to make the score 6-4.

Ryan Ludwick had a chance to tie it in the 9 th , but struck out swinging to end the game.

Listen to Jason Motte’s comments after the game