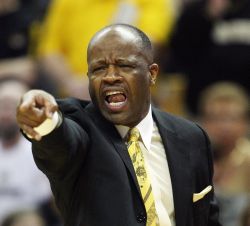 Late Tuesday evening, the University of Missouri announced they have reached an agreement in principle on a new seven year contract with Anderson to coach the Tigers through 2016.

You can put to bed all the rumors of Memphis wanting Anderson, Georgia offering $2 million, forget it.  Mike Anderson is staying put.

No official terms of the contract were released, but the Kansas City Star is reporting that Anderson’s salary will be $1.35 million.  Mike DeArmond of the Star wrote, "A deferred pay package of $200,000 each season brings the yearly guarantee to $1.55 million. Incentives, if all were achieved, would bring the top pay for Anderson in any season through 2016 up to $2.278 million."

In a released statement Anderson commented,  "We have always appreciated the commitment Mike Alden and his staff have had towards Missouri Basketball and I am excited to remain here at Missouri.  We are looking forward to the future of this program and can’t wait to continue building on the success of this past season."

Director of athletics Mike Alden has been talking with Anderson for quite awhile about a contract extension, but there was pressure to get something done soon after the Tigers lost to UCONN in the Elite Eight.

Georgia was throwing $2 million at Anderson, and Memphis surfaced this week in possibly having interest after news came out that John Calipari would leave for Kentucky.

"We are excited Coach Anderson is going to be at the University of Missouri for a long time," Missouri’s Director of Athletics Mike Alden said. "He’s done a tremendous job rebuilding our basketball tradition and is poised to lead our program to new heights in the coming years."

Anderson base would make him the third highest paid coach in the Big 12 behind KU’s Bill Self and Rick Barnes of Texas.

Previous Post: « Lawrence headed to Final Four, Carroll, Lyons will play in April
Next Post: Purple martins could use some help »