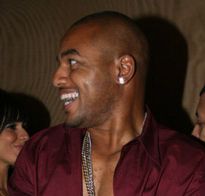 As part of the probation terms, Johnson can’t drink alcohol or visit any bars or nightclubs in Kansas City after 9pm.  He will also take anger management classes and perform 40 hours of community service.