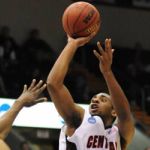 The Central Missouri Mules had chances in the waning seconds, but the shots just didn’t fall as the No. 1 University of Findlay Oilers held on for a 67-65 victory in the NCAA Division II Final Four Thursday night at the MassMutual Center.

It was the second appearance in the national semifinal in the last three seasons for the Mules, who finish their season at 30-5.

The Oilers, who improve to 35-0 on the year, hit a three with 43 seconds left to grab a one-point lead. Central Missouri turned it over on the next possession, but UF hit only one of two from the stripe to make it 67-65 with 13 seconds left. A 12-foot jumper by senior guard De’Andre Byrd from the wing with three seconds left was off the mark, and the Oilers secured the rebound. The Mules had one last chance from half court at the buzzer, but it was short.

Central Missouri went back and forth with the Oilers in the opening period before a bucket by junior forward Sanijay Watts put them ahead at 14-13. UCM would push its lead to as many as nine with 6:22 to play on a three by Byrd, but the Oilers cut it back to 32-27 before the break.

Neither team shot the ball well with UCM hitting 37.9 percent and the Oilers shooting 36.4 percent in the half. De’Andre Byrd led UCM with nine at the break while UF was paced by National Player of the Year Josh Bostic at 12.

Findlay came out in the second half to tie it at 35 with 15:44 left, but Central Missouri quickly answered with a 7-0 run over the next two minutes, capped by a three from junior guard Tremaine Luellen. Three consecutive threes by the Oilers put them back on top with 7:15 left. The two squads went back-and-forth over the next few minutes, before consecutive buckets by Watts and senior guard Joe Young made it a three-point UCM lead with 1:53 left. UF got to within two on a free throw, and that set the stage for the go-ahead three by Marcus Parker.

Findlay used a 36-30 rebound advantage, including 16 on the offensive end, to get the win. The game saw eight lead changes and six ties. The Mules were led by Watts with 18 points (12 in the second half), while Byrd had 13, and Young and Luellen had 11 apiece.

The Mules will be welcomed on Tuesday back in Warrensburg with a Parade and Pep Rally at 4:00 p.m.