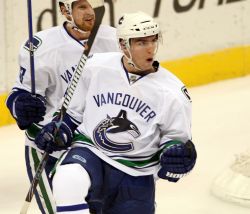 David Perron and Andy McDonald scored power play goals with each scoring their 13th goal of the season as the Blues broke a 2-2 tie to win 4-2 and stay in the playoff hunt in the Western Conference.

Alexandre Burrows scored midway through the second period to tie the game, (shown in photo by Bill Greenblatt, UPI St. Louis) after TJ Oshie assisted on a short handed goal and scored earlier in the second to put the Blues up 2-1.

Oshie wasn’t feeling well earlier in the day and skipped the morning skate.  St. Louis, which moved to five games over .500 for the first time this season, has 79 points, just one behind Anaheim and Nashville in the playoff race.

Chris Mason stopped 21 shots for his first career victory over the Canucks in eight appearances. He played his 25th straight game and improved to 21-20-6 after a 3-13 start.