Governor Jay Nixon (D-MO) has signed into law SB 313 , the mechanism to track every dollar received by the State Treasury under the federal stimulus package. The legislation codifies the two special funds which have been up and running since February 26th. The goal is to ensure transparency and accountability of those federal funds. 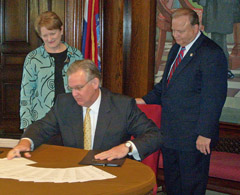 Nixon was flanked by Senator Gary Nodler (R-Joplin), Chairman of the Senate Appropriations Committee, and Senator Joan Bray (D-St. Louis), the ranking Democrat on the panel, as he signed the bill at his Capitol office.

"This is an important step," said Nixon. "To help state officials, government agencies, and all in Missouri make sure that they can ensure that our recovery funds are transparent and are put to the best use possible to create jobs and move our economy forward."

The Governor has also established a special online portal – Transform.mo.gov – to allow taxpayers to track the disbursements and to put forward ideas for recovery projects. The Governor’s Office claims more than 3,250 proposals and ideas have been submitted so far.

Previous Post: « Does Missouri have what it takes to advance?
Next Post: Senate committee approves linked deposit loan program changes »