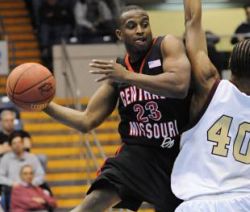 The No. 6 Central Missouri Mules are headed back to the NCAA Division II Final Four for the second time in three years following their 86-77 win over No. 5 Gannon University at the MassMutual Center in Springfield, MA.

The Mules overcame their largest deficit of the season, trailing by 12 points with 12 minutes to play to pick up their 30th win of the season.  With one more win, the Mules will tie the 2006-07 squad’s school record of 31 victories.

Central Missouri (30-4) battled back and forth with Gannon (30-4) the first half with neither team going up by more than five in the first 18 minutes. The Golden Knights took a 25-21 lead with 8:59 to play but Central Missouri answered with a 9-0 run, highlighted by a three-pointer from senior guard De’Andre Byrd, to take its largest advantage at 30-25.

GU ran right back at the Mules though, going on an 11-0 rally to make it 36-30 with 1:56 to play. Mark Demski got it started with six consecutive points, before senior guard Joe Lindsey capped it with a couple free throws. The Golden Knights went into the break with a 38-32 advantage as UCM trailed for only the sixth time at the half all season.

Gannon hit 57 percent in the opening period while Central Missouri downed 50 percent of its shots. Lindsey led GU with 10 while junior forward Sanijay Watts had 10 for the Mules.

Lindsey got the Golden Knights rolling early in the second stanza as well, scoring eight points in the first 6:01, along with senior forward Kyle Goldcamp, who had six in the span.

Gannon led by 12 with 12 minutes remaining, but Central Missouri started to chip away after that, getting back-to-back threes from Byrd and senior guard Joe Young, who only played two minutes in the first period because of foul trouble.

The Golden Knights answered with a bucket from Goldcamp, but Alex Moosmann got in on the three-point action with 9:53 left to make it 59-54. Young traded threes with GU on the next two possessions, but Goldcamp again answered with a bucket inside to push it back to a seven-point advantage with 8:38 left. Central Missouri trimmed it back down to four on a three by junior guard Tremaine Luellen with 7:27 left, and tied it at 68 on a jumper in the lane by Moosmann with 5:05 on the clock.

GU briefly took back the lead, but UCM took that advantage back for good with 3:00 left on a layup by Watts off a feed from Byrd. The Mules went up by five with 1:21 left on a couple free throws by Watts and stretched it to as many as eight with 34 seconds left.

Watts led the Mules with 21 points, while Byrd fired in 20 on the night. Moosmann and Young had 12 and 13, all of which were in the second half. Luellen also put up 13, helping the Mules shoot 66.7 percent in the final stanza, and a season-high 58.7 percent for the game.

The Mules will play at 7:30 CDT Thursday night against Findlay.  The game can be seen on CBS College Sports TV.