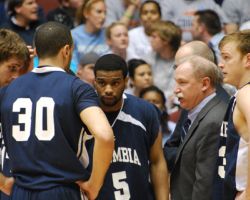 Rocky Mountain College (Mont.) jumped out to a 21-point halftime lead and never looked back on its way to a 77-61 victory over Columbia College in the championship game of the NAIA Division I Men’s Basketball National Championship Tuesday at Municipal Auditorium in Kansas City.
(Photo courtesy of  Cougar athletics )

Devin Uskoski posted 14 of his team-high 24 points in the first half in leading the Battlin’ Bears to the first NAIA national championship in any sport in school history. Uskoski also added a tournament-high 20 rebounds as he earned the Chuck Taylor Most Valuable Player Award for the tournament.

Tuesday’s championship contest in front of a crowd of 3,377 marked the first time since tournament seeding began in 1957 that two unseeded teams played for the NAIA title. This marks the fourth time since the NAIA Division I Tournament moved back to Kansas City in 2002 that an unseeded team took home the championship, and the first since Texas Wesleyan University in 2006.

Rocky Mountain led for all but 14 seconds of the first half, when Columbia’s Brett Hoskins drilled a three-pointer at the 18:15 mark to give the Cougars a 3-2 lead. Richardson scored on the ensuing possession to spark a 9-0 run to put Rocky Mountain in front, 11-3. Later in the period, the Battlin’ Bears reeled off 13 straight points to boost its lead to 42-21 with just over two minutes left in the half. Richardson and Uskoski each scored five points during the spurt for Rocky Mountain.

“It was an amazing ride, the ride of a lifetime and it just crashed,” said Columbia head coach Bob Burchard.

Columbia ends its season with an overall record of 30-8. The Cougars won 17 of their final 19 games, and were making their first national championship appearance in school history. Christian Lewis netted a season-high 24 points to lead the way for Columbia. Brett Hoskins chipped in with 13 points as Greg Stegeman pulled down a team-best five rebounds.