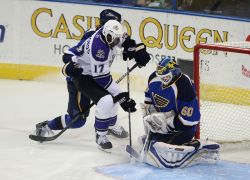 Chris Mason recorded his fifth shutout and the young guys on the Blues produced as they shut out the Los Angeles Kings 2-0.  The Blues remain one point behind two teams  for the final playoff spot with nine games to play.  (Bill Greenblatt, UPI)

Rookie Patrik Berglund scored twice in the third period to and Mason made 22 saves.  Berglund, who snapped a 10 game streak without a goal told nhl.com "Mason played unbelievable."  David Perron assisted on both goals.

The Blues, trying to end a three-year playoff drought, have 77 points, one point behind Nashville and Anaheim for the final spot in the Western Conference, with nine games to go.

Berglund, limited to two assists the previous 10 games, got the first two-goal game of his career. His first of the game came on a tap-in and he put a puck away after a shot trickled past Kings’ goalie Jonathan Quick.