One of the leaders of the conservative movement in America believes the Republican Party must get back to its core beliefs if it is to return to power on the national stage. Former Arkansas Governor Mike Huckabee, a 2008 candidate for the Republican presidential nomination, visited Jefferson City this week to speak on behalf of the Vitae Caring Foundation – a national pro-life organization headquartered in Missouri’s capital city. 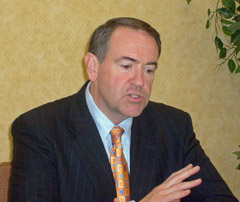 During an interview with the Missourinet, Huckabee was asked what his party must do to regain favor with the American people. Huckabee says the best way for the GOP to leave the political wilderness is to embrace the values that put the party in control of the White House, both houses of Congress, and the majority of governorships and state legislatures.

“We did not lose those arenas of political practice because we were too conservative,” said Huckabee. “We lost them because we abandoned the principals of prudent spending, attention to debt and deficits. We abandoned the idea that we were going to be the champions for life and traditional family. We thought that those issues could be subjugated.”

Huckabee does not think much of the idea of giving up on traditional Republican beliefs in an effort to encourage Democrats to switch sides.

“When we did that,” explained the former Arkansas Governor. “We got our heads handed to us because when Republicans start sounding, acting a lot like the other party – well, why in the world would people elect them? They’ll just pick the real Democrats, not the phony ones.”

The 2008 GOP presidential hopeful won’t say whether he’ll take another run at the White House, insisting what matters most are the ideas and principles that unite the party, not the person at the helm. And, Huckabee sees an opportunity, in his current role, to influence the direction in which the party and country are headed.

“I want to be a part of the debate,” says Huckabee. “And right now I’m able to do that on the program that I have on the Fox News Channel and every day, three times a day, commentaries on ABC Radio Network – Monday through Friday. That may be my role. It may be that that’s where I’ll find my voice more effective.”

But what about that next political campaign … whether it’s two years or four years or even longer down the road? Huckabee leaves open the door:

“I don’t rule out a future candidacy, but I’m certainly not forming the committee right now.”