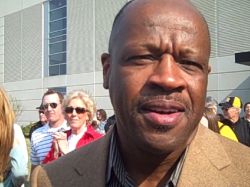 Missouri guard J.T. Tiller led a crowd of about 100 outside Mizzou Arena in a M-I-Z-Z-O-U cheer and Mike Anderson has been waiting for this day since he took over the Mizzou basketball program three years ago.
(Click on the picture to view MU rally)

The Tigers boarded their bus and flew to Boise, Idaho where they will prepare for their first NCAA tournament appearance since 2003.  The Tigers are the #3 seed and will face #14 Cornell.

I’ve talked with insiders around Boise who tell me that you should expect to see Utah State as Missouri’s second round opponent.  I’m told they won the WAC Conference and are underrated, plus Marquette is without their point guard.  Maybe some inside information for you while you fill out your bracket.