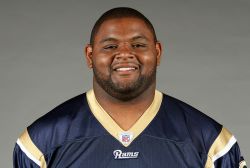 It wasn’t much of a surprise.  The St. Louis Rams have released tackle Orlando Pace.  (photo by Bill Greenblatt, UPI)  It’s a move that will save the rebuilding Rams $6 million under their salary cap.  The 33 year old has been banged up the last couple of years.

Pace, was the selected by the Rams as the No. 1 overall choice in the 1997 NFL Draft out of Ohio State University.  The Rams acquired the choice from the New York Jets in exchange for the Rams’ first- (sixth overall), third- (67), fourth- (102) and seventh- (207) round draft picks.  Pace was the first offensive lineman chosen No. 1 overall since the Minnesota Vikings chose Ron Yary in the 1968 NFL Draft.

"Orlando Pace has been a mainstay on the Rams’ offensive line since he was drafted in 1997, and has proven to be one of the most efficient offensive tackles throughout his career," said Rams General Manager Billy Devaney.  "We thank him for all that he has done for the St. Louis Rams and we wish him the best for the remainder of his career."