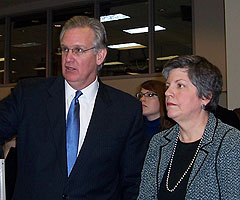 Napolitano made the trip to Jefferson City upon the invitation of Governor Nixon, who has known Napolitano since she served as Attorney General of Arizona. She was in her second term as Arizona governor before being chosen by President Obama to head the Department of Homeland Security.

Nixon gave Napolitano a tour of the Missouri Information Analysis Center and the State Emergency Management Agency’s Emergency Operations Center. Nixon hosted Napolitano for lunch at the Governor’s Mansion prior to flying to Kansas City for the conference. Both Napolitano and Nixon will address the conference, expected to draw about 1,000 state, local, tribal, territorial and federal emergency management personnel to Kansas City.

Napolitano says she will tell attendees how the federal government plans to share the intelligence it gathers with state and local agencies, so they can prepare for any sort of disaster, whether man made or an act of nature.