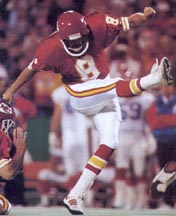 He will also be honored in a ceremony at halftime of that weekend’s game. The franchise’s all-time leading scorer, Lowery scored 1,466 points.  Lowery joins Jan Stenerud as the only kickers to be enshrined into the Chiefs Hall of Fame.

Lowery kicked for 14 seasons with the Chiefs from 1980-93.  Lowery set many Chiefs records.  He converted 80.2% of his field goals and 99.3% of his PATs.  He’s also the all-time scoring leader and holds Chiefs career records for made field goals (329), PATs made (479) and PATs attempted (483). He owns the three longest field goals in Chiefs history, including 58-yarder against Washington and the L.A. Raiders.