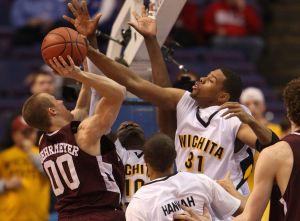 Missouri State shot just 18.5 percent from the field in the second half and 29% percent for the game in a 59-46 opening-round loss to Wichita State in the Missouri Valley Conference Tournament on Thursday evening at Scottrade Center.

The Bears who finished 11-20 in Cuonzo Martin’s inaugural season as head coach, cut a four-point halftime deficit to one point less than a minute into the second half behind a free throw by Spencer Laurie and a dunk by Wade Knapp. The 30-29 deficit was short lived as the Bears would go nearly eight minutes without another field goal, while the seventh-seeded Shockers extended their advantage to 42-33 on a pair of Garrett Stutz free throws at the 12:29 mark.

MSU fought back to pull within 44-38 on a three-pointer by Chris Cooks with 8:41 to go, but the Shockers scored the game’s next seven points to lead 51-38 and were never threatened again down the stretch.

MVC All-Freshman selection Kyle Weems scored the Bears’ final field goal of the season on a break-away dunk with just over a minute to go. He finished with a career-high 20 points to go with five rebounds and a perfect 4-for-4 effort at the free throw line.

Weems, who scored 16 in the first half, was the only Missouri State player in double figures. Will Creekmore, an MVC All-Bench Team selection, recorded 10 boards off the bench.  Seniors Chris Cooks and Spencer Laurie had six and five points, respectively, while classmate Wade Knapp fouled out with four points in just nine minutes.

The 2008-09 campaign marked Missouri State’s first losing season in eight years and just the 15th losing campaign in school history. Thursday’s game also marked the Bears’ earliest departure in the MVC Tournament in their 19-year affiliation with the conference.